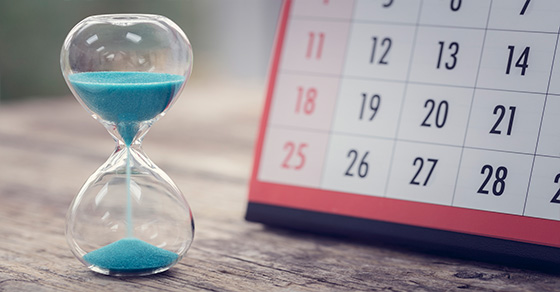 The May 17 deadline for filing your 2020 individual tax return is coming up soon. It’s important to file and pay your tax return on time to avoid penalties imposed by the IRS. Here are the basic rules.

For example, if your payment is two months late and your return shows that you owe $5,000, the penalty is 1%, which equals $50. If you’re audited and your tax bill increases by another $1,000, the failure-to-pay penalty isn’t increased because it’s based on the amount shown on the return as due.

The failure-to-file penalty runs at a more severe rate of 5% per month (or partial month) of lateness to a maximum of 25%. If you obtain an extension to file (until October 15), you’re not filing late unless you miss the extended due date. However, a filing extension doesn’t apply to your responsibility for payment.

The failure-to-file penalty is also more severe because it’s based on the amount required to be shown on the return, and not just the amount shown as due. (Credit is given for amounts paid via withholding or estimated payments. So if no amount is owed, there’s no penalty for late filing.) For example, if a return is filed three months late showing $5,000 owed (after payment credits), the combined penalties would be 15%, which equals $750. If the actual tax liability is later determined to be an additional $1,000, the failure to file penalty (4.5% × 3 = 13.5%) would also apply for an additional $135 in penalties.

A minimum failure to file penalty will also apply if you file your return more than 60 days late. This minimum penalty is the lesser of $210 or the tax amount required to be shown on the return.

Both penalties may be excused by IRS if lateness is due to “reasonable cause.” Typical qualifying excuses include death or serious illness in the immediate family and postal irregularities.

As you can see, filing and paying late can get expensive. Furthermore, in particularly abusive situations involving a fraudulent failure to file, the late filing penalty can reach 15% per month, with a 75% maximum. Contact us if you have questions or need an appointment to prepare your return.

Categories: Accounting, Articles, and Taxes
This entry was posted on Wednesday, July 21st, 2021 at 3:10 pm. Both comments and pings are currently closed.