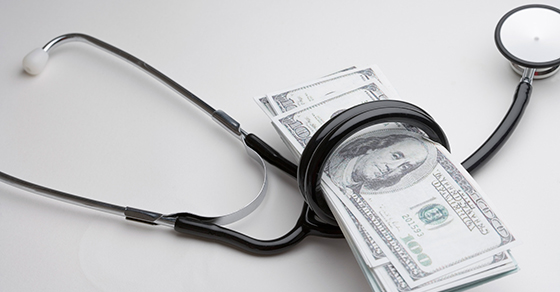 Various limits apply to most tax deductions, and one type of limit is a “floor,” which means expenses are deductible only if they exceed that floor (typically a specific percentage of your income). One example is the medical expense deduction.

Medical expenses that aren’t reimbursable by insurance or paid through a tax-advantaged account (such as a Health Savings Account or Flexible Spending Account) may be deductible — but only to the extent that they exceed 10% of your adjusted gross income. The 10% floor applies for both regular tax and alternative minimum tax (AMT) purposes.

By bunching nonurgent medical procedures and other controllable expenses into alternating years, you may increase your ability to exceed the applicable floor. Controllable expenses might include prescription drugs, eyeglasses and contact lenses, hearing aids, dental work, and elective surgery.

Normally, if it’s looking like you’re close to exceeding the floor in the current year, it’s tax-smart to consider accelerating controllable expenses into the current year. But if you’re
far from exceeding the floor, the traditional strategy is, to the extent possible (without harming your or your family’s health), to put off medical expenses until the next year, in case you have enough expenses in that year to exceed the floor.

However, in 2017, sticking to these traditional strategies might not make sense.

The nine-page “Unified Framework for Fixing Our Broken Tax Code” that President Trump and congressional Republicans released on September 27 proposes a variety of tax law changes. Among other things, the framework calls for increasing the standard deduction and eliminating “most” itemized deductions. While the framework doesn’t specifically mention the medical expense deduction, the only itemized deductions that it specifically states would be retained are those for home mortgage interest and charitable contributions.

If an elimination of the medical expense deduction were to go into effect in 2018, there could be a significant incentive for individuals to bunch deductible medical expenses into 2017. Even if you’re not close to exceeding the floor now, it could be beneficial to see if you can accelerate enough qualifying expense into 2017 to do so.

Keep in mind that tax reform legislation must be drafted, passed by the House and Senate and signed by the President. It’s still uncertain exactly what will be included in any legislation, whether it will be passed and signed into law this year, and, if it is, when its provisions would go into effect. For more information on how to bunch deductions, exactly what expenses are deductible, or other ways tax reform legislation could affect your 2017 year-end tax planning, please contact us.

Categories: Accounting, Articles, Individuals, News, and Taxes
This entry was posted on Tuesday, October 3rd, 2017 at 4:19 pm. You can follow any responses to this entry through the RSS 2.0 feed. You can leave a response, or trackback from your own site.