Individual tax calendar: Key deadlines for the remainder of 2017 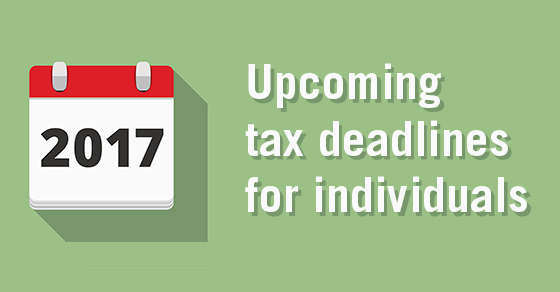 While April 15 (April 18 this year) is the main tax deadline on most individual taxpayers’ minds, there are others through the rest of the year that are important to be aware of. To help you make sure you don’t miss any important 2017 deadlines, here’s a look at when some key tax-related forms, payments and other actions are due. Keep in mind that this list isn’t all-inclusive, so there may be additional deadlines that apply to you.

Please review the calendar and let us know if you have any questions about the deadlines or would like assistance in meeting them.

Categories: Accounting, Articles, Business, Individuals, Non-Profit, and Taxes
This entry was posted on Tuesday, April 18th, 2017 at 3:22 pm. You can follow any responses to this entry through the RSS 2.0 feed. You can leave a response, or trackback from your own site.